I think that I've mentioned before that the people in this lab completely rock because they're great science-and-otherwise geeks to be really dorky around.
Let me illustrate this (once again) by relating something that happened this morning. One of the other graduate students had just finished preparing a really finicky set up that he had never done on his own before. When he did it perfectly, he loudly proclaimed (without looking at anyone else or apparently even caring that anyone else was there) in his best low booming voice, "FLAWLESS VICTORY".

I made a rather embarassing snort-explosion noise as I attempted to keep from laughing very loud and very long.

I posted on craigslist today looking for an old computer Dianna and I could turn into a DOS Gaming Box. By flipping through the ads I managed to find such a thing for $10 in Alameda, so now I'm stuck telling all the respondents to my own ad that I've already found a computer.

I feel like such a dick when I tell them that I don't want their old computers. I try to reassure them: "It's not you, it's me". But I don't think they believe it. I just hope that they don't see Dianna and me walking down the street with our new love: an AT-cased P133 hottie.

I want to see 28 Days Later so badly that it hurts. Huuuurrrrrrttttssssss.....

The last few minutes have made for a rather surprising and surreal day. I stopped off at the local Used Computer Store (that's its name) and picked up an old monaural headset and microphone made by Labtec. As I read through the brief instruction manual, I noticed that the tech support number had an area code that I recognized. That's when I remembered that, when this microphone was made, Labtec was based in Vancouver, WA. As I drove home, reminiscing about the good-ol Vancouver BBSing days, I spotted two kids that couldn't have been more than 15 squatting on our corner and playing craps for big fat stacks of cash.

Salam Pax just posted a large number of pictures of Iraq from his recent days in CIVIC (Campaign for Innocent Victims on Conflict). They're quite interesting, but very< slow to load. The main page of Dear Raed is broken for some reason, but you can use the second link in this post to get to the right entry.

Go eat at Cha-Ya. They're located at 1686 Shattuck Avenue, Berkeley (510.981.1213, but no reservations). It's very very small so be prepared for a wait. But also be prepared for the best vegan Japanese food you'll ever eat.

Let me amend that. Be prepared for some of the best Japanese food you'll ever eat, vegan or not. Let me especially suggest the veggie tempura. I can even describe its deliciousness.

A few days ago I tore my left index knuckle open on a very sharp door frame. This led to a decent amount of bleeding and a rather sore knuckle. But it's been getting better and as of today a nice scab had formed.

Color me dumb. And in pain.

I just noticed that the the page hosting the image for this post was trying to give out cookies to browsers. And while cookies are tasty, they don't belong on this page.

I've been checking the CH blogs over and over and over and over these past few days. For some reason I feel restless and bored. I guess I 'm hoping that someone will post something earth-shattering and fun. While the haircut extravaganza on Threequarters was pretty close, it just wasn't enough. Maybe my dentist appointment next week will be so incredibly exciting that I'll feel completely renewed. Realistically, though, I kind of doubt that I'll feel anything other than extraordinarily minty fresh.

Dear Raed is back up and a large backlog has been posted. There's some very, very interesting stuff in there. For example, while we all knew about the U.S. Army guarding the Oil Ministry while the museums were looted....did you know that the money printing works was also looted while coalition forces looked on? Not just looted, but methodically robbed: printing templates, paper, and security stripes were stolen, along with unnumbered bills. So now many shops won't even accept certain denominations of dinars. You'd think protecting a nation's currency would be pretty high on the list of "things to do to help rebuild".

Seen a few blocks from my house: 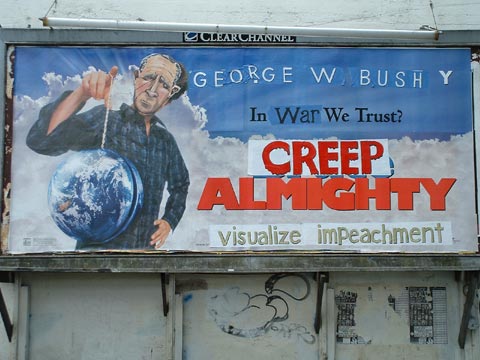 The project that I'm currently working on in the lab was started by a former rotation student, Paul Pease. He expressed the protein, worked out some initial crystallization conditions, and generally did a lot of useful sciencey-stuff. Which means that he'll be second author on the paper that eventually comes out of the project.

So my first paper's by line will read, "Corn J, Pease P, and Berger J."
It makes me hungry, just thinking about it.