There are quite a few well-educated people on Cementhorizon, so perhaps one of you kind folk can answer my question.

As I was driving home today, screaming along with "Watching The Detectives", I suddenly wondered, "When did things get so good?" Specificallly, I'm wondering when the majority of people in the "developed" nations (let's leave arguments about developed nations for another time...you know what I mean) enjoy a quality of life that might be characterized as "obscenely comfortable".

Most people go to bed full every night (which is creating its own set of health problems). Climate-controlled housing, complete with built-in sanitary drinking water, is the norm. Working hours are no longer obscene and employees are treated like people (thank you, unions!). In short, life is good.

So when did this happen? I'm not looking for vague moral discussion (though they're fun too, and are welcome in the comments section). But I'd love it if someone could provide me with some sort of timeline describing when comfort became the norm. The timeline could even be so broad as "20th Century -- everything gets good", since that would at least let me know that quality-of-living reform has only really come about in the last century. Step up to the plate history buffs. It's your time to shine.

(by the way, if you disagree with the basis premise that most people enjoy the comforts I've mentioned, please say so in the comments section. but you'd better have some numbers to back up the statement)

Just a few days ago I started playing A Tale In The Desert, a Massive Multiplayer Online Role Playing Game (MMORPG) that I've been seeing rave reviews for. But all the sites say that it will be a sleeper hit, and now I know why.

First off, there's no combat. None. Zip. Zero. Zilch. The closest you get to attacking someone or something is playing a strategy game against them. But there's a LOT of building. And doing. And stuff. SO MUCH STUFF.

Second, there are quests in the game, but they're not Steal The Sacred Eye of Offler quests. They're Build A Tent quests. Which is harder than it sounds, because to make a tent, first you need canvas. And to make canvas, you need twine. But to make the distaff to make twine, you need bricks and boards. But to make boards, you need a wood plane. But to make a wood plane, you need.....
Basically, you make everything you need from scratch, either with your own hands or with someone else's help.

Which brings me to the social aspect of the game. There's a quest (Leadership) that requires you to have shrines built in your honor. And the only person that can build a shrine for you is a complete newbie. And the only way they'll build a shrine for you is if you take them around the game, introduce them to everyone in the area, show them how everything works, etc.
So you'd think that everyone would begrudgingly do a halfassed job of teaching and whine when they didn't get a shrine. But the social spirit in this game is so intense that some people take hours out of their time to show someone how to play (and it's pretty complicated) without even needing the shrine.

And what do awaits the average player? Well, learning the culinary arts, building sculptures, raising livestock, horticulture (there are strains of plants that people can cross!), worshiping gods, running for public office, and so on and so forth.

I'm surprised I got any work done this weekend.

Here's an ethics question for you....
I went to a seminar today given by A_____ Fire. It was originally meant as a big-shot scientist honorarium talk, but there's a tenure-track job opening in the department, so it was co-opted into a job talk at the very last minute. The thing is, there are several other candidates for the position within the department. The people within the department are very good scientists and gave great job talks of their own. A_____ Fire's talk wasn't all that hot (but not the worst talk in the world). The thing is, Fire is something of a prodigy in the field because his lab almost single-handedly created a technique that has revolutionized the way biology is done (RNAi, for those who care about these things). There's talk of a Nobel Prize in the next decade or less, so basically if Fire wants the job, he's got it.

Now what I'm wondering is this: should the Cell and Developmental Biology department have suddenly turned this into a job offer? Like I said, there are great people already in the department that could do absolutely fantastic science if given the job, but they just aren't A_____ Fire. On one hand, it seems a little bit like getting your friends' hopes up and then bringing in a ringer at the last minute. On the other hand, there's a budget crisis, so if the department is going to hire anyone, shouldn't they get their money's worth? Because, while I think A_____ Fire might be sub-par as a lecturer, he'd be doing phenomenal work and be a huge feather in UC Berkeley's cap.

Update: Fire won the Nobel Prize in medicine on 10/1/06. Perhaps he just wasn't on top of his game when giving this talk.

This guy is direct-linking my beautiful Sombrero Space Ghost on his links page. I'd ask him to stop, but....his page is so goddamn bizarre. If it weren't for the racist comments, I might even encourage the guy.

I tell you what. He's got a guestbook. Please verbally abuse him.

Boy, what a relaxing weekend. On Saturday I went to a congrats-you're-going-to-have-a-baby party for two people in the Berger lab (the one I want to join). While there I talked a few people into starting an MCB homebrewing label (sort of like the brewing I did while I was in Phi Sigma at UPS). One person wants to call the label "MCBrewing". But since we've got access to all sorts of crazy yeast strains, I want us to actually use them and call ourselves "Mad Cow Beer". We could have "[PSI+] Stout" and "Prion Porter" and "Hsp70-defect Hefeweizen".

On a less geeky note, I stretched my conches up to 6ga today (Sunday). The right ear hurt a bit, but I barely even noticed the left. I don't really have an end goal in mind, so I guess I'll just stop whenever I see a size I like.

I think I mentioned putting some upgrades on my bike a few weekends ago (just before a ride). Next on the list is a new front cog, cranks, and bottom bracket. So I thought I'd post a sort of before/after picture. On the top are the old front cogs that are still on my bike. In the middle are the new rear cogs (and derailleur) that I just bought. And on the bottom is something to make you say, "Awwwwwwwww." 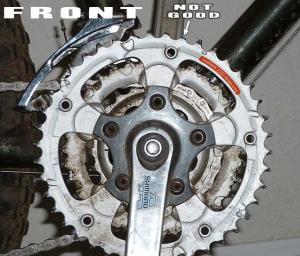 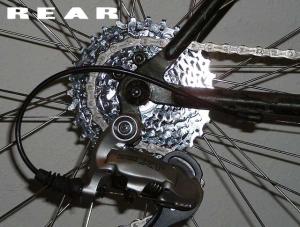 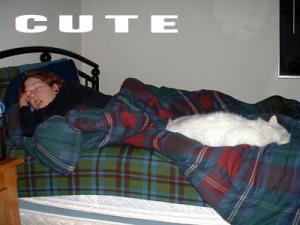 Thank you, and goodnight.

Been a while since I've posted. I feel a bit like I'm in limbo....like I'm just waiting and waiting and waiting for things to happen. I get to choose a thesis lab on the 24th, and I'm pretty sure I'm going to get my first choice. But my first choice isn't the lab that I'm in at the moment. That would be fine if my current project in this lab was going well. But I've pretty much proved that what we thought was going to be an article in Nature is instead just a lot of nothing. So I'm stuck puttering around, re-running scripts just for the hell of it, sticking a few things into a presentation, and generally just being bored.