Upon later questioning, he would admit to having cared. At the time, though, his feelings were masked by a waxy patina of nicotine, acne, late-night coffee, tritely stated but poorly understood dogma, and hormones.

It began with the voodoo grapevine of porno mag advice columns, whispered rumors in the boy’s bathroom, and half-heard conversations among his older brother’s best friends. All the mystic signs indicated that chicks dig bad boys, so he adopted an air of indifference and a permanent sneer. Not that he ever had any choice in the matter, since to ignore the inscrutable masters would invite punishment from the autocratic high school status quo. So it was rebellion above all else, and it actually worked. An unending stream of clean and pretty girls who’d grab his crotch in the middle of the movie and maybe hike up their skirts in the backseat of his car, but were seemingly unaware of his presence upon later meetings. Which was just fine, since their friends were already eyeing his leather jacket and torn jeans.

As the years passed, school spun a chrysalis and emerged dripping and rank as employment. All the pretty girls had already visited the wrong side of the tracks, leaving him still sneering and misunderstood, but now celibate. He quickly sensed something was amiss and consulted the newly matured and responsible voodoo grapevine of GQ, whispered rumors in the bar, and half-heard conversations in the health center locker room. Now the signs indicated that chicks dig sensitive guys, so he wore soft shoes and donated money to Amnesty International. The stream of clean and pretty girls returned anew, grabbing his crotch in the middle of the third act and maybe hiking up their skirts on the brilliant white carpet in his third-floor apartment. When they asked about his past over drinks he eagerly confessed that he had truly cared, deep beneath the chitinous adolescent blustering. His clean-shaven face and kind voice perfectly matched his considerate platitudes, and his glasses, shining brightly in the lights, partially obscured his gentle but hungry eyes.

Posted on 12:21 AM
Wiping The Brow of The World

Phew. It's all going to work out. Sarah will be here soon. I'll have to buy her book after book after book to pay her back for all of this driving. I'll be on a plane home tomorrow afternoon, and once I'm back I can collapse and stop worrying. Why the hell do I feel the need to worry when I'm on vacation!? Feh.

Here I am just outside sunny LA (hot, humid, sunny LA), trying to enjoy the last few days of my trip down to Southern California. Everything was fun and games at first, but now I kind of want out.

The BBQ was fun fun fun in the sun sun sun, though. I met a new person, got to hang out with friends, and spent a lovely late afternoon lying on a grassy hill with Dianna. Heading up here to LA for so long was possibly a mistake, though. No offense to Denise....she's a nice girl. But we've definitely grown far far apart in the last few years. Case in point, I can look directly to my left and see a lovely little non-tongue-in-cheek painted wooden placard proclaiming "Home Sweet Home". To my right is a tall glass case filled with almost a hundred tiny little ceramic and glass forest creatures.
Additionally, I'm becoming more and more aware of something Dianna has alluded to several times: LA is not a nice town. Jason will no doubt contest this point, but personally it's just not my kind of place. Now Denise has gotten into a car accident and I'm wondering
1) if she's OK and 2) how I'm going to get back down to San Diego to catch my plane back to the Bay Area.

I'm also starting to remember why I don't like flying. The long flights and having to sit in one place for extended periods bother me. But what really makes me nervous is being trapped into a single schedule. I'd like to come home right now. But instead I'm stuck here until the day after tomorrow. Whee.

This entry has been brought to you by Grumpy Gus Intl., supplier of all your grumpy needs.

Meet Jacob. He's willfully unemployed and about to fly to San Diego. His favorite thing right now is having health coverage named after a fictional terrorist organization.
"COOOOOBBBRRRAAAA!!!!" 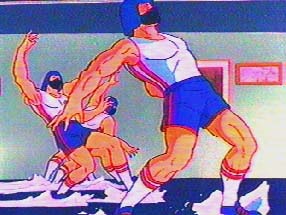 Seven days since my last post, and all I have to show for it is another cheatin' entry. But what do you expect from a boy that's too busy being happy to post in a blog?

As part of a farewell gift (the other half was 2-3 pounds of various mints) my coworkers got me a gift card for Barnes & Noble. Items purchased so far are:


And I've still got $15 left on the gift card! Three cheers for finding good books in the "bargain" section.

After the bookstore I walked the mile home through burning hell. It wasn't so bad on the way to the store, since I was tearing right along in my anticipation of wandering through an entire building of books for a few hours. But on the way back I was just anxious to start reading and listening, so the trip through the 90 degree heat seemed to take forever. Stupid East Bay. Why can't you be more cloudy and rainy?

DCI has come to DVC. Speaking of nostalgia.....

Not that I was ever in Drum Corps International myself, but two women I've been involved with were either DCI veterans or had a vested interest in DCI (six degrees of DCI). Which could be seen as a little bit of a coincidence, since I'm willing to bet most of you have never even heard of DCI. So seeing DCI here in my new home state brought a sentimental little tear to my eye.

I wonder what our lives will be like when we routinely live to be 200 or 300 years old? Since the late 80s sci-fi authors have routinely addressed this possibility in a variety of ways. Some (eg - John Varley) seem to think it won't make much of a difference in the way we view the world. Others (eg - Bruce Sterling) believe that it will lead to a whole host of previously unknown psychological problems, as everything becomes boring and routine. Still others (eg - Kim Stanley Robinson) feel that the worst problems will be the ones that already plague us: de ja vu and nostalgia.

Here I am, just 22 years old, and I already look back with yearning for times that I intellectually know were pretty crappy. But viewed through the sheer and somewhat shimmery lingerie of time, suddenly things seem like they were wonderful. But what's going to happen when I'm 40? When I'm 50? Will I be paralyzed by nostalgia for the past when I have 100 years of memories behind me?

And nostalgia isn't the worst of it. Everyone wishes they had done some things differently. We obviously don't stop caring about those things after the biblical three score and ten. But what will happen when we've got four times as many regrets and four times as many memories?

And speaking of memories, is there a physical limit to how much one person can remember about their life? I'm already missing everything but snapshots and snippets from life before 6....When I'm 300 will the same be true for life before 40?

On one hand I'm tempted to say that I'll take a pass on any radical life-extension treatments that ever become available. But I know myself too well. There's always more to do, and I'll never feel finished. I'll just keep wanting one more year, then ten more years, then twenty more years, until finally I'm as old as the sun. Maybe then I'll collapse under the weight of my own age and become a black old-hole.

What do you know. Not 5 minutes after I whined about not being on the MT bandwagon, Gene messaged me and fixed me right up.

I'm still working on the layout, but feel free to let me know what you think so far. I'll be tooling around for the next few days (weeks, months, etc.), and we'll see what I come up with. 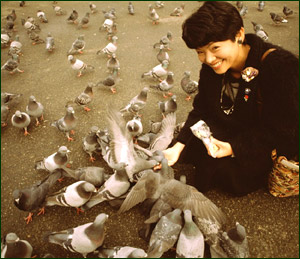 In case you suffer from a brain disorder that makes it impossible for you to the movement of time, let me first mention that it's been a while since my last update. The original reason for the delay was intense waiting; specifically, waiting for Gene to get us Cement Horizon peons set up with Movable Type so that blogging wasn't such an exercise in manual labor. But lately it's just become a habit not to update. However, Kris made threatening motions regarding my lack of updates, so here's the goodies.
(P.S. Kris - that picture on the bottom is 'specially for you)

Today someone asked me why my relationship with M_______ failed over long distances, and they were surprised by my dislike of phones. Upon prodding, the managed to tease out the reason behind my dislike, and I thought I'd share it, because there's really nothing else I'd care to write about.

When I interact with people, I tend to do so by paying just as much attention to facial expressions and gestures as I do to words and tone. When I'm talking to someone in person things play out swimmingly, since I get the whole picture. When talking to someone online things are also fine, because people tend to compensate for the lack of gesture in text communication by overstressing tone and verbage. However, how many times have you caught yourself gesturing while talking on the phone? Since talking is involved, just like in face-to-face communication, we tend to slip into a comfortable mode and act like the other person can see what we're doing. That's incredibly frustrating for me, since I end up feeling detached from the person on the other end, both intellectually and emotionally. I look for the cues, but of course they're not there because the other person is miles away, so I can't really get any feeling from the party in question. As a result, I avoid the phone like it was a sentient flame whose mother I had inadvertently spilled punch on at last week's holiday party.

I remember hearing rumors of video phones back in the early 90s. Where did that technology go? If I could see who was talking, then I'd be perfectly fine with a phone. But until then, I'll be doing most of my business in person and over email / instant messaging, thank you very much. 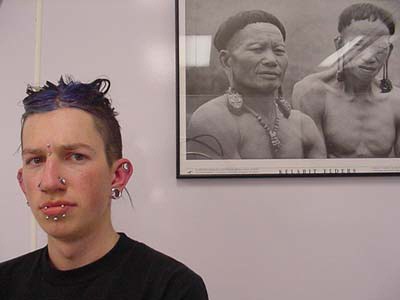