Salt of the Earth

Yesterday I had a conversation with my roommate Katie regarding the California climate. Even though she's from the east coast and I'm from the northwest, we both find the weather in California slightly depressing for the same reason. Namely, there is no weather.
Katie is used to afternoon thundershowers, snow, or humidity, depending on the season. I'm used to wacky rain-on-a-clear-day, overcast days, and cool sunny days, depending on the season.

But all California supplies us with is unending heat and sun. Nothing else. Case in point, this week's weather forecasts for Seattle vs Berkeley.
The nice weather was fine at first, but now I'm dying for some rain. Or at least the chance to wear a sweater all day.

PS - that sound you're hearing right now is the world's smallest violin playing just for me.

I've decided to condense the long whining rant I had previously posted into the following sentence:
"Don't try using the new iTunes for Windows unless every one of your MP3s has a complete ID3 tag."

Dianna and I are back from Monterey, Pacific Grove, Cambria, and all points in between. The day we left I was wonderfully surprised by a delicious chocolate mint birth-quake cake, made by the beautiful Dianna. After gorging ourselves on a gigantic piece each, we made the uneventful drive down.

The first few days were spent hanging around Pacific Grove (which is actually just Monterey renamed), where our room was. Oddly, "Pacific Grove Plaza" truly is a plaza. As in a shopping plaza. So the locale was a little strange. The room itself, though, was set up like a very large one-bedroom apartment (with a nice little loft), so all was fine and dandy. While in the Monterery area we (of course) visited the Monterey Aquariam and goggled at all of the exhibits and fish and snappy things. We also made a short hike around Point Lobos, where we ogled at cute little otters through other people's binoculars and watched cormorants dive for fish.

On Monday we visited Dianna's sister in Santa Cruz and visited UC Santa Cruz. Holy mother of FUCK, but that campus is beautiful. Sort of hard to navigate in, though.

On Tuesday we made the drive down Highway 1 through Big Sur to San Simeon and Cambria. The drive down was, of course, breathtaking. Our first stop upon arriving at San Simeon was Hearst Castle, which was gorgeous. But I felt a bit like Indiana Jones, since everywhere I turned I found myself exclaiming, "This should be in a museum!" After the castle tour we checked into our cute little cabin at the Cambria Pines Lodge and walked into town.
We attempted to find Farenheit451 (scroll down to see the pictures), but instead found that it had been forced out of town by those interested in preserving Cambria as a boring kitchy tourist town. Disheartened, we visited Robin's for dinner. If you're ever in the Cambria area, I can't recommend Robin's enough. Dianna ordered something called the "Holiday Vegan", which was mashed potatoes, mushroom gravy, stuffing, butternut squash, and turkey-style tofu. As Dianna commented, the tofu absolutely put Tofurkey to shame, and the rest of the dish was just as delicious.

And that was the tale of our trip. Except for the massive amount of Cheapass gaming that Dianna and I did. Chief Herman's Holiday Fun Pack is fun for both the whole family and two game-crazy people hanging out near Monterey. 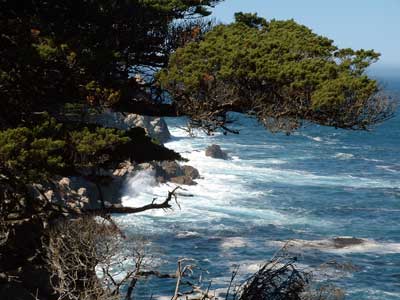 How cool is Andrew, my newest roommate? So cool that he went out and downloaded Mr T's Be Some Body or Be Somebody's Fool, without me ever mentioning it. Doug was the first to introduce me to the wonders of Be Somebody's Fool (with lyrics for Mr. T written by Ice T), but when we left UPS the tape followed him to Oregon. But now that there's a copy on our home network, I can learn the value of Recouping every day.

PS - Doug, I highly recommend that you download both this and this.