Today has been an unexpected, but delightful, Home Improvement day. I've been rather unhappy with the arrangement of our living room for quite some time, but have never really done much about it. Thankfully, though, one of my roommates (Katie) decided that she greatly disliked the current layout of the apartment and that this weekend it was time to do something about it. So, after some very successful shopping at thrift stores (chairs and decorations), Home Depot (wood stain and various supplies), and Ikea (islands for the kitchen), our apartment is ever so much more livable.

This week has been absolutely exhausting. On Monday I started teaching a senior-level molecular biology lab class that meets 3x a week for 4 hours a day. Good god it's a lot of work. Not only do we TAs need to prepare everything for the students so they can do the lab, we pre-run the lab at least a day in advance so that we can be sure everything works. Which means that, inbetween doing each undergraduate lab twice, writing up all the handouts and instructions for each lab, sitting in on a graduate class taught by Nick Cozzarelli, and trying to solve a structure for my own thesis work, I haven't even had time to be tired.

Graduate school has made me a bitter man. Without Dianna keeping me sane, I'd probably bludgeon someone to death with an FPLC column.

update: I just re-read this post. Boy-howdy, it's a lot of scientific whining. Things really aren't that bad....just busy.

Man, those poor New Yorkers sure had it rough when the power went out!

Wesley Willis died in the hospital this Friday. We have lost a truly great donkey-ass-whipping machine.

Posted on 11:25 AM
Screaming hello

These cheered me up with a swiftness.

For those of you who have been following things like this, Jesus Castillo’s appeal was denied by the Supreme Court. For those who haven't been following, Neil Gaiman summed it up pretty well with, "I think the hardest thing to believe is that Jesus was found guilty of selling an adult comic, from the adult section of the store, to an adult police officer, and convicted because the DA convinced the jury that all comics are really intended for children. I can't imagine a world in which the same argument would have worked for books or for films..."

This sets a very disappointing precedent. Comics can be kids stuff, but aren't necessarily. I think it was Michele who told me that after World War II, the first piece of Japanese literature to address the Rape of Nanjing was a manga, simply because it slipped under the censors' radar. Books like
Jimmy Corrigan: The Smartest Kid on Earth, Torso, and Sin City are fantastic pieces of art and literature, but definitely not for kids. I don't see how the Jesus Castillo case is any different than a prosecutor going before a jury and claiming, "Just examine your stereotypes. All gay literature is obviously aimed at entrapping young boys." and inexplicably winning.

Take that, avatars of untastiness! 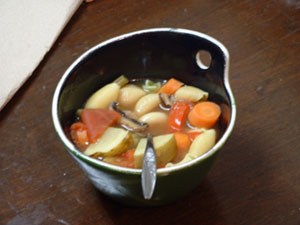 Dianna and I went for a walk in Tilden to look at the sunset. We didn't see a multitude of bunnies this time, but a family of deer were standing by the road on the drive back down. Pictures of the excursion are here.

Dianna, Katie (Dianna's sister), and I saw Gigantic tonight. It got me fired up to finish my TMBG shirt. I'm going to make the design, put it on Cafepress, buy the item, and then remove it (since it blatantly flouts copyrights). It will be the best shirt ever. However, I originally started working on the design many many months ago and then just forgot about it. So I'd better do it quickly, while the motivation is still fresh.

I really hope this is just a bitter ex-employee spouting off. It would make me incredibly sad if HavenCo went under. Sealand and the embedded HavenCo business is the sort of thing novels are written about (and have been written about....read Cryptonomicon for more). If you really want a thrill, try googling "sealand 1978 attack".