Long time no post.
A huge wave of nostalgia just washed over me as I visited Boing Boing and saw that Bart Nagel was selling a whole crapload of Mondo 2000 paraphernalia. I used to worship Mondo2k as the be all and end all of... well, just about anything. Part of me still does. Why did I never get around to becoming an overt cyberpunk? Though that's not really the right word for it.
"Next year, when I've got more time," I'd always tell myself. It's a sad thing when you can feel yourself bursting with a culture that you're never openly part of. Or even privately part of, for that matter. I've been in love with the ethos embodied by Mondo2k for over a decade. When do I get to act on that? When can I convince myself that it's finally OK? 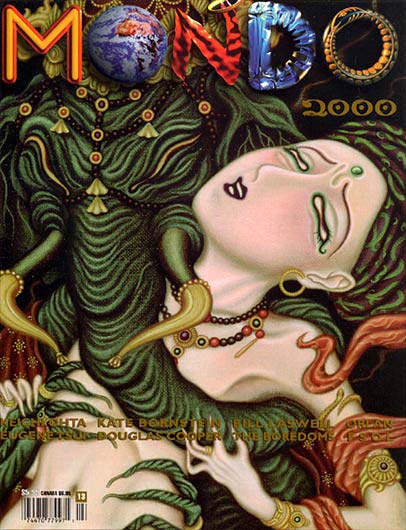 Pause Online: Music Videos. Sort of like sputnik7, but every video is a goodie. My current favorite is "Sugar Water" from Cibo Matto (look under Michel Gondry's section).

Dianna and I went back to the Trinity Alps over the July 4th holiday and tried the Pacific Crest Trail for a second time. For those of you playing the home game, our first trip ended in disappointment and snow. This time things went much more smoothly. So smoothly, in fact, that on the last day we hiked the 9 miles out in four hours. We felt like raging badasses until the bug bites and sore muscles started taking their toll.

Eloise can sate your hunger for pictures.