Dianna and I made a trip to 4Jays in Antioch to pick up a TI-99 for her gaming pleasure. I was sucked into nostalgia land almost as soon as I opened the front door. Nintendos, Super Nintendos, and Commodore 64s, oh my!
Impulse buys ruled the day and left me the proud owner of an old-school clunky original Gameboy. But there's no time for idle chatter. There's Castlevania to be played. 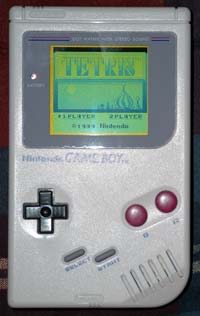 Yes. By me! This is what happens when you leave your prize in the room where I'm using the computer, particularly when the joysticks for my prize suck balls. Castlevania it is, until I find those good blue ones.

I will ignore your childish blue ball discussion so that I might tell you that I almost got a gameboy from a garage sale the other day, but I showed incredible restraint and didn't get it. I knew that my life would end immediately and Tetris would open up shop in my hollowed out body. Uh, can I come over in, like, ten minutes?

Yes, but only if you'll play Parsec with me with crappy joysticks.

i need a game boy