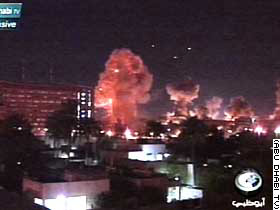 And the U.S. is pissed about a couple of planes hitting two skyscrapers? Look at what we're doing to a city filled with civilians.

"Only military targets" my fucking ass.

it worked for me

i can see it. maybe it's your browser.

more to the point, this sucks. i am trying to get stats on how many civilians we're actually killing.

for those of you interested in this, commondreams.org has some good (not rhetorical or idiotic) info and links to intelligent independent media, though i admit the name is dumb.

Yeah, if anyone has numbers, I would love to see them. Thanks.

jason, horrendously skeptical about the legitimacy of this:
http://www.iraqbodycount.net/

this has good links, including the one kristen posted today plus others:
http://www.manywaystopeace.org/2003/02/28

Wow, so far (according that first questionable site) civilian death is pretty minimal. Hope it's true, though it's difficult to believe.

that was my reaction, jason. too low to be believable AT ALL. plus there's the thousands already killed since the first war there with all the bombings in the last 10 years, and maybe that doesn't "count" per se if you're asking just since THIS particular "war" started. but still...umm yeah. i don't know.

hmm especially unsure am i now when i notice that site says this, "Current deaths are more newsworthy than past deaths" and doesn't include indirect casualities. "more newsworthy"?! heh.