Impulse buys are the best. Within the last week I've bought entirely new gubbins for my computer (new m/b, cpu, ram, and case) and a bed. But not just any bed. This is the cadillac of beds. Simply touching it makes you feel all comfy and sleepy. Please enjoy the two pictures following this post. The first is of Dianna, who accidentally touched the bed and was sucked into its black hole of comfiness. The second is of something vitally important. UNDER the bed. As in, we have one. I lived with a mattress on the floor for so many years, I really appreciate a good underbed. Note the box (it's a dremel) to the right of the underbed. That's evidence of the stuff I've already begun to shove into the underbed. I *heart* underbed.

Plus, now that the bed's so high, Bella won't be able to dump root beer all over it. 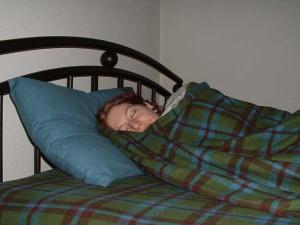 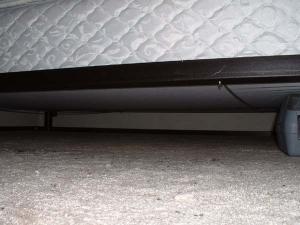 Oh yeah. And life wouldn't be complete without a seemingly irrelevant picture.

no, dear, that picture really IS irrelevant.

Oh, I thought it was a view of what was under your bed. I knew the woman lived there, but I didn't know she had a daughter.

well, c'mon, jason, it's been a few years since you checked in with the woman under the bed. people do have lives, you know. she doesn't spend all her time just flinging plants around and waiting for you to come visit again.

It's just that I always thought she was the type to put career before family. In a perfect world, she could fling plants AND have a fulfilling home life, but I think we're both a little too old for fantasies.