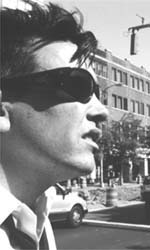 little do you know that while you're at work, the tool has been opening the door of your room, taking pictures of every check you've ever written, and posting them on flickr.

It's not his fault, Kris. One of his self-help books told him that it was a good way to be open and mindful of his roommate's consciousness. Um. Energy communication raw food antioxidant. Okay, I'm out of Tool jokes.

I guess he self-helped himself to Jacob's cash.

That guy's such a tool.