I have a dilemma. Within the last month, I've become more and more dissatisfied with my living situation. One roomate is nearly intolerable, and the other is so private that I see her at most ten minutes a week. This makes for a depressing housing situation, since I have no social interactions at home. With that situation as backdrop, I've recently been asked to move in with a former roommate that is a friend, and whose company I greatly enjoy.

The problem is severalfold:


Actually, I'm going to stop the list right there, because writing out this post has just made up my mind. As I think harder about my reasons for not moving (both listed above and otherwise), many of them involve complications arising from my current location. I think that's a pretty good sign that I need to get out of here. As soon as I hear back from the former (hopefully future) roommate, I'll tell The Tool that I'm gone like the buffalo. 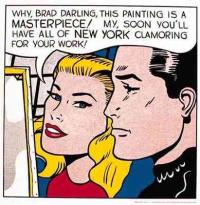 I know that asking what your entry images are and what the hell they're doing there is usually fairly futile, but in this case I can't resist. What did you Google to get that particular picture, and why? Because it's on the cover of an anthropology book that's been sitting in my room for several weeks and which I just realized last night didn't get back to the library with the rest of the books from that particular project.

Also, I think you should move. Your apartment is very nice and contains one complete tool. Fuck 'im. Is the person who asked you to move in one of the Cementhorizon crew? If so, I heartily endorse this plan. Actually, I heartily endorse it anyway. Get the hell out of there!

Well, you do have one thing going for you which is that you live in the great city of Berkeley, with amazing Tennant's Rights. Check out Suggestions for Recovering Your Security Deposit and the rest of the information regarding the law all provided by the Berkeley Rent Stabilization Board.

The person who asked me to move in is Katie, of 1635 fame. I'd be moving into the lower unit of that building, so it would be a double bonus. Not only would I be living with Katie, but there would be a building-wide sense of community. But I need to get a hold of Katie with a quickness, because I already told her "no" about a month ago (The Tool was still tolerable at that point). Last I heard, a room is still open, but it could go very soon.

The image came from Image Searching "buffalo" and finding a professor from SUNY with a Lichtenstein on their page.

Also, I actually live in Oakland. I still haven't looked up tenant rights for my fair city, just in case.

Hey! That would be awesome! Get on that!

1635 is also both more convenient and more conducive for visiting from me. And I'll totally help unmove you.

Thanks for the support! In fact, I just got off the phone with Katie, and the deal is on. I'll give notice to Tool tomorrow or the day after. The other roommate (at 1635) also sounds very promising. He's moving out of his current living situation because he feels that it's just a place for his stuff, and not a home. A nice bit of symmetry, there.

I also talked to the other roommate (at my current place, just to confuse the issue), and she's looking for a new place, too. The Tool repulses all.

Just FYI, I'm currently a block off the 43's route down Shattuck. So if you're ever thinking about visiting (or stopping by to whisk me away from awfulness) in the next month, it's a short bus ride away.

PS - What anthropology book has Masterpiece on the cover?

I'm absolutely willing to whisk you away from awfulness. You're also welcome to self-whisk by coming up to visit me any time you're interested. It's just a hop, skip, several jumps and 100 or so reasonably sober paces from the lab! By the way, are you going to see your parents for Thanksgiving or will you be around here?

The book is The Traffic in Culture (Marcus and Meyers 1995). It's basically an anthropological study of the market in international and indigenous art. Pretty interesting, or at least the one chapter I had time to read was.

I'm going to Kristen's for Thanksgiving day, then getting on a jet plane for Seattle the next morning. From there I'll be going to beautiful Port Townsend for a week with my parents (and back down to Seattle once or twice to visit friends), then returning on the 30th. Yourself?

Not sure really. One of my housemates is having his family's big Thanksgiving dinner here at the house with whoever wants to stay for it, but the awesomeness of that idea is mitigated somewhat by the fact that it's going to be all meaty and gross. I've been meaning to find out what my sister's got planned and see if we can coordinate some sort of delicious togetherness.

I'll help you move again. any excuse to get one last peek at your roommate's eight shelves of self-help books.

Tool is looking for a new roommate now. He had the following to say about the experience:


"Based on my previous roommate screening, I find that everyone seems very interested at first, but once they see the place, and compare it to other roommate situations, only a fraction want to pursue it further."

There goes my last chance to know a famous country singer--I just hope all this upheaval doesn't affect his rising star.

I'll help you move too.

Gasp! Hey! Do you and Katie want to live with a Nut, by some chance? Ingratiating smile?

I'll bring it up with Katie & Ben, but I wouldn't necessarily get your hopes too high. I'd love to live with the little fuzzball, but we'll already have three cats in the house: Bella, Huey, and another cat from Egypt (whose name escapes me).

Sigh. Okay. It's just awkward having her living with someone I really don't know. I'm incredibly grateful to Ken &co for taking care of her, but I'd feel self-conscious going to see her and hanging vaguely around their house not knowing them. But I will work on a clever scheme to get her into Kingman instead.

In fact, Ken &co. occasionally ask when you'll stop by to see Peanut. I don't think you should feel awkward or self-conscious at all. They're both scientists, remember. They know nothing but awkwardness.

That's a good point. I should call them and see if this weekend would be a good time to visit. I might actually have free time! Gasp!

Speaking of my activities for this weekend, though, if you're interested in any zombie rights activism now would be a good time to mention it.

That was my way of saying that, "Yes, I am interested, but will be out of town for a week starting on the 24th."

Now that I think about it, what I mean is something more like passivism. For my -- okay, look, don't laugh, it's a two-unit class, all right? -- for my final project for my Discworld De-Cal I'm making a screenprinting screen of a design with Reg Shoe and one of his catchier pro-dead slogans. Individuals interested in the usual range of printable items -- patches, handbills, tiny wall posters -- should seize the opportunity.

Cock yes, I want an undead solidarity/protest patch.
Though I'm still holding out for a zombie rights march

As long as you're making zombie rights patches, I wouldn't mind indicating my solidarity with the undead. I also have a friend here who's very big into zombie rights, if you wouldn't mind making a patch for her. But only if it's not too much trouble.

and once again austin seems like an excellent place to move to. a place where you can be a proactive zombie OR a pirate protesting zombies.

I want a patch for my patchy bag!