Time for a new regular feature: two-sentence reviews of things I've Netflixed. Boy, that's original, eh? I'll do a few right off the bat to get things started:

Two Sentence Review: Stray Dog
One of Akira Kurosawa's early movies, Stray Dog is just as visually evocative as his later films, but with a unique noirish flavor. Though I found it hard to relate to some of the anxieties of Toshiro Mifune's character, I can't recommend this movie enough.

Two Sentence Review: Hellsing Volume 1
I rented this occult-themed anime series along with Vampire Hunter D, which was more of a guilty-nostalgia whim. Hellsing was so bad that I returned Vampire Hunter D unwatched.

Two Sentence Review: The Kingdom
I've only finished the first episode of Lars von Trier's miniseries, but the quietly spooky goings-on already have me hooked. On an unrelated note, is the the Denmark vs Sweden beef an extremely white East Coast vs West Coast, or is there more going on? 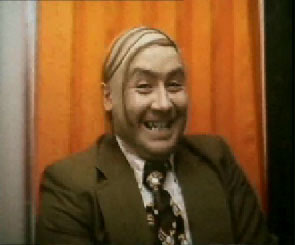 Update: Holy shit. The ending for Episode 2 of The Kingdom is as serious as a heart attack.

You son of a bitch, how far have you gotten in the kingdom? I wanna watch but not alone. I'm frightened.

I'm only two episodes in. I haven't sent it back yet, and the next two episodes are set to come later this week. Want to borrow the first disc when you get back to the states?

i would watch the first two episodes with you jason, and then the rest with both of you. i'm a little frightened too. because i'm a wussy.

That works for me. You up for watching the rest of it with us, jacob? Unless you're too much of a wuss.

Count me in. I'll be getting the 2nd disc later this week. Shall we make it a weekend event?

Crap, crap, crap. I just found out that I sent the wrong movie back, so I no longer have Kingdom vol 1. Since I'd need to send back my current movie and then get back the replacement, I don't think there's enough time for me to Netflix it again by Wednesday. But we could look for it at video stores, such as Reel in Berkeley...