Last night I went to the sing-along version of The Sound of Music with Dianna and Katie. This was the first time I'd seen the movie, so it was quite an experience. During some parts I found myself wishing everyone would just shut up so that I could figure out what was going on. But because certain songs are repeated over and over, I was able to do a bit of singing towards the end of the movie. And what I lacked in singing, I certainly made up for in prop-waving.
No, wait.... What I lacked in singing, Dianna made up for in Edelweiss-waving. I tried my best, but I was a hack compared to the Maria-lover sitting next to me.

During high school went to the midnight audience-participation Rocky Horror Picture Show in Portland every once in a while, so this was a strange nostalgic contrast. I had a terrible urge to do the Timewarp during "I am Sixteen Going on Seventeen". Would that have been so wrong?

Anyway, the "Sing-a-Long Sound of Music" was fun. Check it out at the Landmark California 3 in Berkeley. 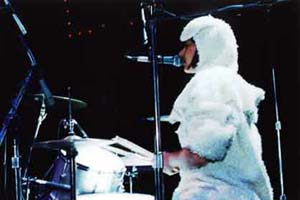 That is to say, check it out in 48 minutes or forever hold your peace. Tonight's the last show.

Were you the only unhomosexual male in the entire audience? Don't worry, I'll answer for you. Yes you were.

i'm having trouble with the idea that you'd never seen sound of music before. which brings me to my horrendously rude question. did you not see it because of the nazis? i'm just...curious. i mean, sound of music!, how would that not be part of anyone's childhood even though it came out when all our parents were (approximately) in high school? my uncle had a huge crush on julie andrews and saw it like 5 times in the theatre. mostly, i think, because it was probably the only movie in vernonia for a really long time AND THERE'S NOTHING ELSE TO DO IN VERNONIA. unless you relish getting drunk in the town dump. a valid life-style choice, i'm here to tell you. i don't know where this comment is going. i think i'm questioning why this movie is a part of our (and by "our", i'm excluding jacob, and anyone else who didn't watch it multiple times as a kid. did lots of people never see it then?) generation's childhood when it was pretty old by the time it entered our sphere. what films will we as a parental generation inflict on our children?

I've never seen it, but I know the music, mostly from hearing at least one girl sing "Sixteen Going on Seventeen" at every musical audition I went to for about six years running. Also, someone wrote parody lyrics to "So Long, Farewell" for this assembly they had in elementary school when Mrs. Wilcox retired.

The Nazis have nothing to do with my non-viewing of the film, but the fact that a major character is an admiral in a landlocked country disturbs me a little.

Yup. Definitely because of the Nazis. Ever since that horrifying Bedknobs and Broomsticks encounter, I've avoided Nazis like the plague.

was the first time you saw bedknobs and broomsticks at that thanksgiving dinner at lindsay's senior year?

When I was 5-8 Bedknobs and Broomsticks was my favorite movie. I think I've seen it 15 times or so.

That bedknobs movie was rad, and that thanksgiving was the first time i'd seen it. I've only seen the sound of music once, and it didn't do much for me. Although I like when the old nun sings Climb Every Mountain.

Now that my opinion on the subject has been put down, you can all die satisfied.